Today is International Women’s Day and a fitting topic for today’s Lenten blog.  Shining a light on the women of the world celebrates just how far we have come in matters of justice and equality — but even more importantly, it shows how very far we have to go to ensure the safety and protection of women and girls everywhere.

In recent times, the #metoo movement bravely brought to light the many ways in which women have been victimized  and abused by those in positions of authority and power.  Most of my women friends can share experiences of lecherous bosses or handsy guys.  I recall a salesman making some overt comments about me at a convention a very long time ago.  Over the course of dinner and a number of scotches, his intentions were more and more clear and I, a very naive 20-something company rep, would have been in deep doo doo had I not been rescued by an observant co-worker who basically dumped the interloper on his derriere outside the restaurant.  I know many other women for whom there was no intervention.   #metoo has helped to put a laser on this behaviour.

I remember a distraught friend rushing over to my house in a blind panic.  She had suddenly remembered a date in college that was in fact, a drugged rape.  For fifteen years she had no memory of that night, except the puzzle of waking up in her bed naked, alone.  She had married, had kids and one day, watching the news of a woman whose date had drugged and raped her, the puzzle pieces came back together and she remembered what had been done to her.   Who could she report this to?  Where was the guy now all these years later?  How many other women had he raped?  Helplessness turned to rage.  And frustration.  And horror. And shame.  After so much time, there was not much to be done other than make a report.  Women deal with these kinds of feelings all the time. I think that is why #metoo has been so important.  It is time to raise consciousness.

Every day, women are emotionally and or physically abused by their boyfriends or husbands. They receive less money for the same job as their male counterpart. They get told they are hysterical when they show emotion, and called a bitch when they are justifiably angry.

When I was first ordained in 1985, I was told that I would have to work a whole lot harder than my male counterpart to be accepted in my role as clergy.  When I got up to preach, some people walked out because it was offensive to hear a woman in a leadership role in the Anglican church at that tender time of change.  I was told that women priests were distracting and cause men to think unclean thoughts.  When I was first pregnant I was “jokingly” told by my priest supervisor that he shouldn’t have given me time off, since I obviously enjoyed myself with my husband while we were on vacation….  oh, I have stories.

The battle for respect, equality and fairness is ongoing here in North America, especially with someone in the White House who has a vocal and blatant disrespect for women. There are states ruled by GOP men who are passing more and more oppressive laws dealing with women’s reproductive rights.  We need to be vigilant and not lose hard-won ground.

International Women’s Day casts a spotlight on the women in the world who still have NO rights, who live in oppressive societies, who may at any time be beaten by their husbands and whose lives are impossibly harsh. I saw an item on CNN that showed an app used by Saudi men who track their wives’ every move (some have multiple wives) and make sure that they don’t leave the country.  Hello?  2019.  Deck is stacked against anyone not male.

We cast the spotlight on those women around the world who are forced into the sex trade and treated like commodities, who have no freedom, no life of their own. When will serious efforts be taken to keep women safe?  This is evil borne out of greed and the behaviour of those who fuel this monstrous activity treating women and young girls like chattel.  Disposable.  Of no value other than for a man’s pleasure.  I read where 3 year old girls are being sold to be married in Yemen so families can survive.  This is unspeakable.

We cast the spotlight on the countless women who go missing every month.  Here in Canada, we continue to question the government about the dozens of Aboriginal women who’ve disappeared.  Where are they?  What happened to them?  They count.  They matter.  What are you doing to stop it?

This is a day when we take up the banner and make a noise. A loud and angry noise.  A noise so loud that it rises up like a collective volcano of hot fire and ashes.  We are strong. All women matter.  All women are important.  Don’t mess with our sisters.

Women matter. That should be obvious.  But as long as unevolved men who are threatened by the talents, intelligence, ingenuity and loving spirit of women are in charge, we will continue to fight for equality for all women on this planet.

Jesus was outspoken about the rights of women in his day.  He broke  patriarchal boundaries and spoke directly to women of other cultures.   He brought women into his group as spiritual leaders and disciples, even though Scripture doesn’t literally declare it.  He defended women who could be divorced by their husbands for any reason. He saved a woman from stoning by pointedly asking the men there about their own sins and actions. He reached out to heal both women and men.  He taught both women and men.  He did not indicate in any way that women were lesser.

It might be a good thing for those who call themselves Christian –especially those in authority — to go back to their bibles and read it, especially the gospel of Luke.

Here is a beautiful prayer written for today by a Franciscan named Deborah Hirt.  May it be our truth.

Lord, make me an instrument of peace:

Bless all women who daily strive to bring peace to their communities, their homes and their hearts. Give them strength to continue to turn swords into plowshares.

Where there is hatred, let me sow love:

We pray for all women who face prejudice, inequality and gender disparities. Help us see and to face the discrimination against women in all the many forms it may take.

Where there is injury, pardon:

Comfort all women who suffer from the pain of war, violence, and abuse. Help them to become instruments of their own reconciliation and peace.

Where there is division, unity:

Forgive all women and men who let differences breed hate and discrimination. Let your example of valuing all of creation help us to see that we are equal partners in the stewardship of your world.

Comfort all women who struggle in the darkness of abuse, poverty, and loneliness. May we stand with them in light to acknowledge their suffering and strive to remove the burdens of shame or embarrassment.

Where there is doubt, true faith:

We pray for all women who live in fear of their husbands, fathers, and forces that control their lives. Help them to be empowered to be their true selves through your everlasting love and faith.

Where there is despair, hope:

We pray for all women who live in the despair of poverty, violence, trafficking, slavery,and abuse. May the light of your love bring them hope.

Where there is sadness, new joy:

Help us to see the strength and goodness in all women and men.
Transform our hearts to celebrate the love and grace of all people.

About The CCCChttps://journeyingwithgodcom.wordpress.comHoly Spirit, lead us, for all your ways are beautiful and all your paths are peace.... We are a progressive, inclusive, welcoming church community with roots in the Old Catholic Church, which has been around since the late 1800s. Our worship is the best of all worlds - a little Anglican, a little Catholic, a little Lutheran, and a lotta love. We have valid orders, apostolic succession, uphold the Seven Sacraments and we follow the Two Great Commandments given to us by Christ. 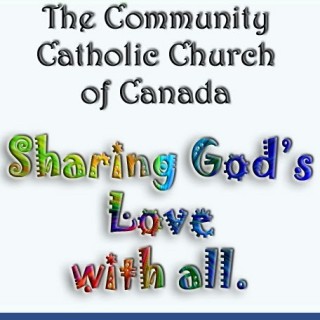 Holy Spirit, lead us, for all your ways are beautiful and all your paths are peace.... We are a progressive, inclusive, welcoming church community with roots in the Old Catholic Church, which has been around since the late 1800s. Our worship is the best of all worlds - a little Anglican, a little Catholic, a little Lutheran, and a lotta love. We have valid orders, apostolic succession, uphold the Seven Sacraments and we follow the Two Great Commandments given to us by Christ.